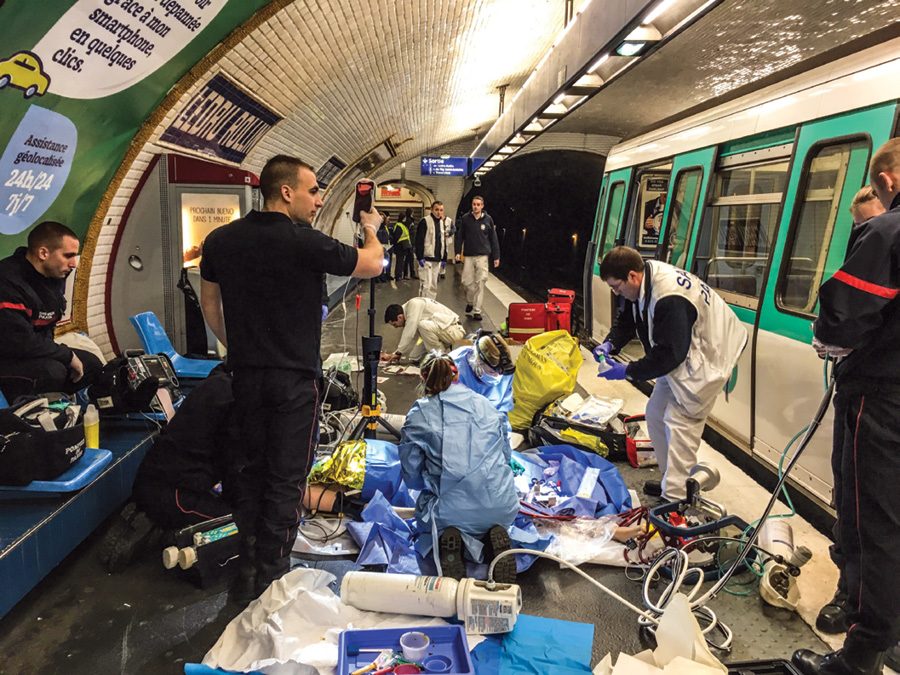 ECPR is now recommended by international guidelines in the management of refractory OHCA of suspected reversible cause, such as acute myocardial infarction, pulmonary embolism and intoxication.1

ECPR brings respiratory and circulatory support, ensuring sufficient blood and oxygen supply to the whole body, especially the brain. The hybrid implementation technique used by Service d'Aide Medical d'Urgence (SAMU) in Paris, which uses a surgical cutdown followed by insertion of the cannula in the femoral artery, is quick, safe and accessible to emergency physicians, with low failure rates compared with percutaneous cannulation.

The objective of ECPR is to perfuse the brain while the cause of the cardiac arrest is sought and treated at a specialty hospital (e.g., by coronary angiography, CT scan, etc.). Indeed, the primary objective is to obtain return of spontaneous circulation (ROSC), however, long-term survival depends on the neurological prognosis of the patient.

Once ECPR has been initiated, acceptable blood flow is restored to the whole body, and especially to the brain and coronary arteries in order to limit ischemic consequences. Many studies, both clinical and experimental, have shown that the blood flow delivered by ECPR is much higher than that delivered by mechanical compressions/cardiac massage. ECPR is therefore considered as a "bridge" in order to have time to treat the cause of the cardiac arrest. The international results of the utilization of the ECPR are very encouraging.2-4

SAMU is a free public service in charge of responding to EMS calls in Paris. SAMU operates Department 75, a single medical dispatch center for the whole city of Paris. In the rest of the country, there's one SAMU per department.

All calls to SAMU are screened by a doctor. The administrative information and reason of the call are initially taken by an assistant dispatcher who transfers the call to a dispatch doctor.

The doctor's role is to give the most appropriate medical response depending on the reason of the call and the degree of severity and emergency: referring the patient to a general practitioner, sending a general practitioner to the patient's home, directing the patient to the nearest ED, or dispatching the most appropriate means of transportation or care (i.e., an ambulance, a firefighter BLS unit or a mobile intensive care unit [MoICU]).

The French prehospital system is based on the possibility of a MoICU being sent out to the patient.

The MoICU is usually composed of three people: an emergency physician or anesthesiologist intensivist, a nurse and a paramedic.

The ambulance used by the MoICU contains everything a physician would need to treat an acute patient in hospital ED or ICU. This system is the opposite of the "scoop and run" concept, as we send the hospital to the patient in order to evaluate the patient on scene, make a diagnosis, stabilize and/or treat, and transport the patient directly to the most appropriate service. This could mean transporting straight to the catheterization lab for an acute myocardial infarction, to the ICU for a coma which has required intubation, or to the operation room for an unstable aortic dissection needing immediate surgery.

This system can do everything from "stay and treat," such as prehospital ECPR, or "run and treat," in the case of penetrating trauma for a damage control situation.

In the case of a call for a patient in cardiac arrest-witnessed or diagnosed over the phone-a BLS team, operated by the Paris Fire Brigade, is immediately dispatched along with the SAMU MoICU team. Dispatch guides the witness in bystander CPR over the phone.

The BLS team is usually first to arrive on scene, with a mean arrival time within nine minutes in Paris, followed by the MoICU team.

ALS is then delivered on scene until ROSC is obtained. Depending on the presumed etiology of the cardiac arrest, the patient can be taken directly to the catheterization lab for immediate coronary angiography, to CT or to the ICU. The dispatching of the ECPR team and decision-making in the case of a refractory cardiac arrest will be described later.

When the first disappointing results of in-hospital ECPR for OHCA were published (4% of survival in patients presenting refractory OHCA being brought to the hospital for ECPR implementation), the main reason found for these poor resuscitation results was the prolonged low-flow time period (between initiation of cardiac massage and ECPR pump flow).5

We found that one of the items contributing to this low flow period was extraction and transportation times to the hospital after failure of ALS to obtain ROSC. Indeed, in urban settings around the world, it's often difficult for patients to be treated in the hospital within 45-60 minutes of cardiac arrest, even with a load and go strategy.6,7

To begin implementation much earlier, we decided to design a system where ECMO is available as a second line of treatment by a team equipped to treat the patient on scene (e.g., in the street, in the metro, in an apartment, etc.).

The ECPR program at the SAMU de Paris was established in 2011.9,10 Physicians were initially trained for percutaneous implementation, but progressively switched to the surgical hybrid technique due to difficulties with implementing ongoing cardiac massage.

The ECPR team was initially alerted and put on standby in cases of witnessed OHCA for patients under the age of 70, and the team could be requested after 10 minutes of unsuccessful ALS by the MoICU team.

Since 2015, the ECPR team has been available 24/7. The ECPR team is systematically dispatched immediately when a call comes in for witnessed cardiac arrest, at the same time as the BLS unit and MoICU. This is done to be able to start ECPR implementation early, after just 20 min of CPR with an AED, as recent studies have shown that 20 minutes seems to be the optimal time to switch from conventional CPR to ECPR. The team is secondarily canceled if ROSC occurs during ALS or if there's no indication for ECPR.

The ECPR unit can also be requested by the MoICU doctor for patients where chest pain advances into cardiac arrest. The objective behind early dispatch and implementation is to activate the ECMO pump within 60 minutes of collapse.

During 2015, prehospital ECPR implementation was the default strategy, except if the cardiac arrest occurred in the ambulance or with a very short extraction and transport time allowing for in-hospital implementation.

The ECPR team can also be requested by the SAMU dispatch centers from other departments surrounding Paris. This requires a very early alert in order to organize and dispatch the team, especially if this requires the team to be sent out by helicopter.

With this strategy, patients previously too far to reach an ECPR center have become eligible, thus allowing greater equity of care. In this situation, the ideal low-flow time of 60 minutes is extended to 90 minutes. 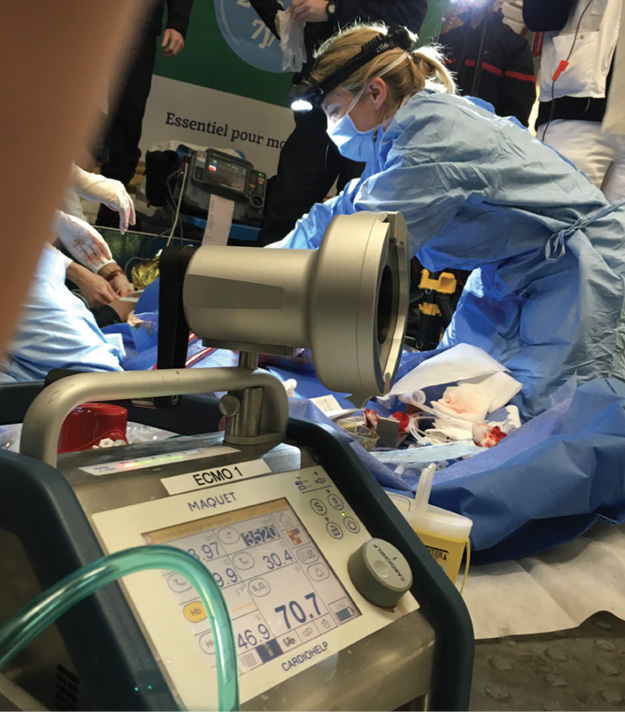 The mobile ECPR response team is available 24/7 and is staffed by three people: a physician (anesthetist-intensivist or emergency physician), an anesthetic nurse and a paramedic.

The physician is responsible for implementing ECPR according to SAMU's hybrid surgical/Seldinger technique, assisted under "sterile" conditions by the first on-scene MoICU doctor first or another available assistant.

The anesthetic nurse is responsible for priming the ECMO machine during the implementation and then preparing necessary drugs with the help of the nurse from the MoICU. (Vasoactive drugs and sedation are systematically administered after ECPR initiation.)

The paramedic assists the physician during implementation, retrieving and handing the necessary equipment under sterile conditions.

Once the ECMO pump has been initiated and pump flow is satisfactory, the patient is transported to the hospital under strict monitoring and supervision, with the team paying close attention to the cannula, circuit, machine and operational and clinical parameters.

Before and during implementation, the ECPR physician coordinates information concerning patient extraction, ensuring acceptable mobilization positions for the patient, especially in case of difficult extraction.

Special protocols have been written to ensure the ECPR process flows at every level.

Call center protocol: A protocol exists in two parts. The first protocol dictates the dispatching of the ECPR team in the case of witnessed OHCA for patients under the age of 70 and receiving CPR.

A second protocol guides the steps once the indication of ECPR has been confirmed. In this case, one person in the dispatch center is dedicated to this case until the patient reaches the hospital.

This protocol includes coordination with other services: firefighters in charge of the BLS; police to escort the ECPR team; blood bank staff in cases where prehospital transfusion is needed, or where ICU or coronary angiography are indicated. All of these steps are checked and followed in real time.

On-scene protocols: Two protocols exist. One for the ECPR team, "how to do it," and the different steps to follow. A second protocol addresses how the MoICU team should proceed once ECPR implementation has been decided. It includes the initiation of mechanical CPR, groin disinfection, drug preparation and limitation of epinephrine.

When SAMU dispatch centers outside of Paris request ECPR, the protocol ensures that the Paris ECPR response unit is dispatched early so that the team arrives on scene with limited delays. 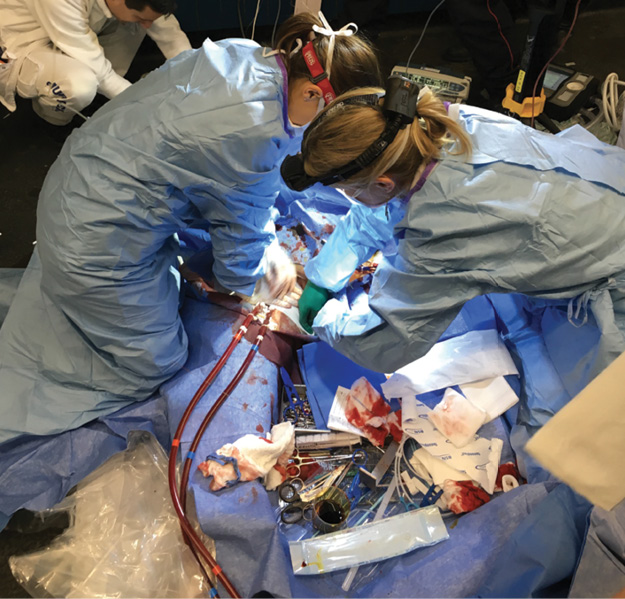 Results from implementing on-scene ECMO show an increase in survival rate from 8-29% with acceptable neurological status.

The prehospital ECPR response team follows a scientific program. The first phase was the publication of the safety and feasibility. The second phase of the research was published more recently, including comparing a series of patients during two successive periods.

In 2015, the ECPR team was sent out at the same time as the MoICU, in order for the team to be on the scene as soon as possible and be able to initiate ECPR early in case of absence of ROSC after 20 minutes of professional CPR. The objective was to reduce the low flow period, which is clearly a prognostic factor for neurological outcome.

The last step is the confirmation of the results by a randomized study. In 2016, a multicenter randomized study was commenced to compare in-hospital and prehospital ECPR implementation. Patients are randomized after confirmation of refractory cardiac arrest eligible to ECPR. This study will include around 200 patients (ClinicalTrials.gov identifier: NCT02527031).

The objective is to clearly show that prehospital ECPR by emergency physicians is possible inside and outside of Paris as well as in other metropolitan areas and more rural settings.

In Paris, prehospital ECPR is now a second line of treatment for refractory v fib cardiac arrest after the failure of conventional care. The results are encouraging, but need to be confirmed elsewhere.

Several other teams have been trained to follow the SAMU ECMO implementation technique. Lyon, another large city in France, and Madrid, the capital of Spain, have recently started ECPR programs that include prehospital ECMO. Additional systems in Brussels, Melbourne, London and cities in the United States are looking to start prehospital ECPR programs, some expecting to begin treating patients in the field in 2018. 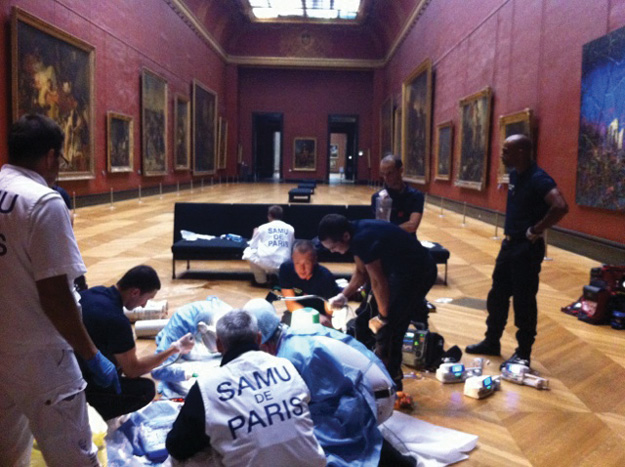